Model of urban geology in Warsaw

Project provides a detailed numerical model of the shallow geological structure of the urban agglomeration of the Warsaw area and its visualization within internet browsers. It presents the visualization of the common elements of the geological structure, i.e. the Żoliborz-Szczęśliwice valley, the deposits of Miocene brown coal. The 3D model is an element necessary to build an integrated information system covering geological and planning data for the Warsaw agglomeration. 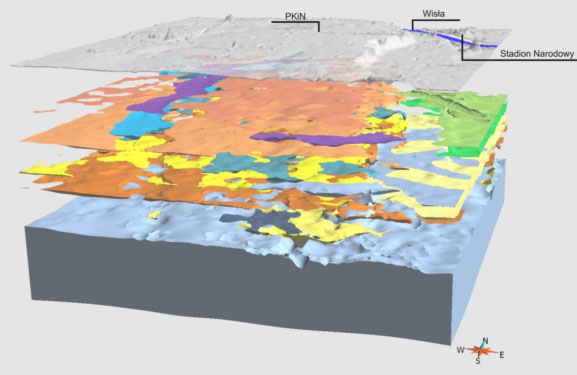 The model is outcome of the comprehensive study covering the geological structure of Warsaw with the scope of geological work and the methodology of research accompanying the development of a detailed 3D model. In the context of previously implemented projects, the model is innovative. It provides, among others spatial interpretation of geological information archived in the form of databases. The utilitarian character of the obtained graphic representation of the model results from the possibility of its use both for scientific purposes and in the conduct of promotional activities.

The detailed model of the deep geological structure of the center of Warsaw was mapped in the state geodetic coordinate system of 1992. The horizontal resolution of the model corresponds to a scale of 1:10 000, while the vertical one depends on the state of geological recognition resulting from the availability of data and their spatial distribution. An independent part of the model is a harmonized in terms of lithological, stratigraphic and genetic disposals a database compliant with the structure of Central Geological Database (CBDG) was created by integration of existing as well as newly acquired geological information as a result of fieldwork and external geological companies.

Observations and conclusions referring to the spatial modelling developed can be an element helpful in the verification of the hypotheses made so far regarding the development of the geological structure. The model of facies relationships within the Pliocene sequence carried out as part of the project using the sequential simulation confirm the hypotheses put forward by scientists involved in the Cenozoic background of Warsaw and the surrounding area, where the occurrence of silty-sandy sediments within the variegated clay complex is a small-scale lens.

The study was prepared at the request of the Minister of the Environment and financed from the resources of the National Fund for Environmental Protection and Water Management derived from the fees specified in art. 84.85 and 85a of the Act of 4 February 1994 on Geological and Mining Law.

WebGL is turned off or unsupported by your browser

Our site requires WebGL enabled to displaying 3D projects. We detect that your browser do not support it or have it disabled. To get more information see:
get.webgl.org

Do not show this again ×